In 1998 I got my first dog - it was a Siberian Husky. Her name was Moe and she was just 5 weeks old when she moved in with me. I lived in Spain at the time, and here it was quite common (at the time) that puppies were sent to a pet store, where they were exhibited in glass cages for possible buyers. I did not want Moe to have that fate, so I took her home in a cardboard box. Moe's father was from Kennel Cuikci in Mallorca and her mother was without pedigree.

Moe grew up as a single dog with me. We spent a lot of time together, hikung in the Majorcan mountains, long walks on the beachs etc. She was good at being home alone while I was at work.

In 2001 we moved back to Denmark and the following year Quatro joined the pack. Quatro was a purebred Siberian Husky from an ups litter in Northern Jutland, and therefore without pedigree. He moved in with us when he was 1.5 year old - and he was the world's gentlest and nicest boy.

In April 2012 came Nuggi - my first husky with pedigree. He was a relocation, 4 months old - and he became the start of my "exhibition career". He came from Kennel Legend of the Spirit in Poland - but it soon became clear that Nuggi was cryptochid, so the show career was pretty quickly put on hold - but I had gotten the taste of it.

In January 2013, I picked up Smutti (Smooth Ride Legend of the Spirit) in Poland. Smutti was exhibited many times with several good results. However, his exhibition career stopped as a Junior as he became too tall (61 cm) and as a 2-year-old he began having sporadic epileptic seizures, which unfortunately increased in numbers and strength over the years.

In May 2018, I picked up Geffie (Gefjun Sibiro Auksas) in Lithuania. Geffie has been shown with good results, including several BOB and BIS placements, and she is now DKCH. Geffie is also a good working dog - she loves to run and pulls like a sleddog should do. She knows what to do when she' gets her harness on.

In March 2020, Rumle (Northerna Bottle of Rum) joined the pack from England. He was picked up in Germany right after the Corona lock-down and has only participated in a few shows. But his exhibition career is unfortunately over, as he as 11 months old is over max. standard height (measured at 62 cm) - but fortunately there are many other fun things than dog shows you can enjoy with a sleddog. We are doing a bit of Weight Pull, which Rumle thinks is fun - and of course he will also be in harness pulling kickbike and sledge whenever possible.

In April 2021, Geffie gave birth to her first litter. She had 3 girls and 1 boy. The agouti girl, Arctic Znowdancer Maggie May, have stayed with us. 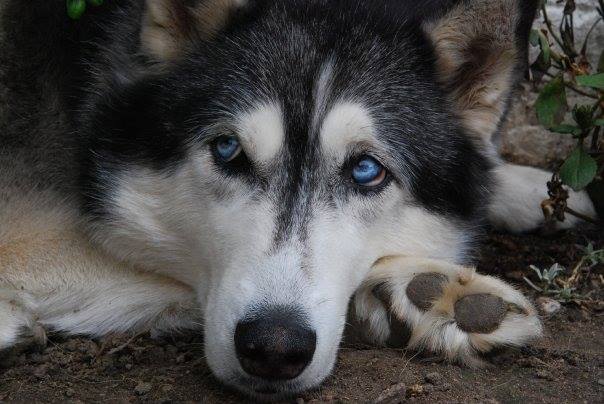